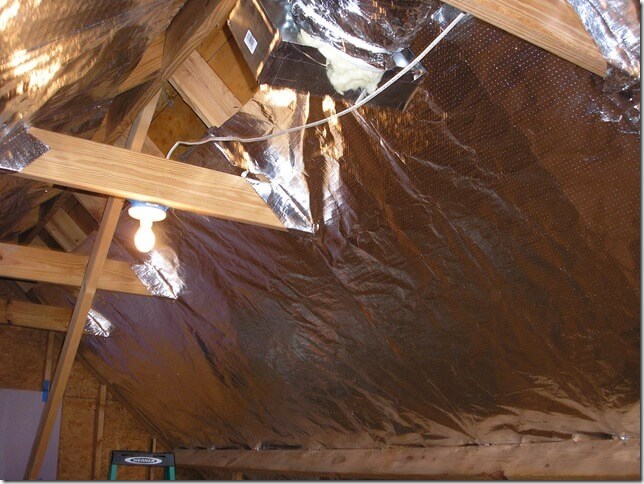 Problem: Large home that was losing energy year round and therefore resulting in year round high gas bills.

Solution: AtticFoil™ Radiant Barrier was installed both over the insulation (for winter impact) and on the bottom of the rafters (for a summer benefit).

Results/Update: The winter was colder than years before, but their gas usage was less. In the summer the heat transfer into the attic was reduced and the attic stayed at (or close to) ambient temperature.

We live in Silver Spring, MD and I have completed installation of about 7000 sq. ft. of barrier foil I purchased from www.AtticFoil.com. I installed all of the AtticFoil™ myself, I’m a lawyer by trade, but I’m handy around the house. Installing alone is doable, but as others have noted, another set of hands would make it easier to mount the foil. But the foil is very light and can be mounted single handed with a bit of thinking. The DC area can be cold in the winter and blistering hot in the summer. I installed the barrier foil over the insulation in the attic for winter savings and on the trusses to keep the summer heat from heating the 200+ feet of A/C duct work and 5 ton A/C equipment we have in the attic.

We have just left our cold season, so I don’t have any experience with cold weather barrier foil savings yet. Yesterday was our first very sunny day since my completion of the truss foil installation. It was not extremely hot (71 was what I saw as the high temp), but the sun was heating the roof. To measure the effectiveness of the barrier foil I installed 2 wireless temperature sensors in our attic. One sensor was placed just under the ridge vent on the sun side of the barrier foil. The second sensor was placed about 3 feet lower, directly beneath the first sensor, and on the “cool” side of the barrier foil. Results: Ambient air temp -71 F; Ridge vent sensor-81 F; Lower/cool-side sensor-71 F — same as ambient. Even on a pleasant day the roof deck warmed noticeably, but there was no measurable heat transfer to the attic air space.

“…no measurable heat transfer to the attic”

I imagine that when we get to our hot season, it will be harder to maintain ambient air temp in the attic. However, it is clear that the attic will be cooler than it would have been without the barrier foil. The truss barrier foil installation has the following benefits: 1) keeps the heat away from A/C equipment and duct work; 2) Keeps the heat from warming the attic building material which would be transferred to the area below by conduction and radiation. 3) Creates a chimney effect in conjunction with the trusses–the hotter the ridge vent area becomes at the top of the chimney, the cooler the air which is drawn in from the lower soffit vents. Simple physics/fluid dynamics concept. 4) The chimney effect causes the incoming cool air from the soffit vents to be directed toward cooling the roof decking rather than spreading every where trying to cool everything in the attic — more cool air cooling a much smaller area — wow. I wish I had known about AtticFoil™ a long time ago.

Literally, I have been noodling how to better insulate the attic to save A/C costs for years — we have plenty of insulation on the attic floor and I could see that putting batt insulation between the trusses would be messy install-wise and would still radiate heat. When I found www.AtticFoil.com after last Thanksgiving I immediately said, “Eureka!” The barrier foil is going to save $$$$ on our $1000+/mo. summer electric bill–bring it on global climate change! March 9 2011 – Just got our February natural gas bill; looks like the AtticFoil™ installed on top of our attic insulation has created a substantial savings on heating costs compared to pre-foil. To do a decent comparison you either need sufficient historic information, both before and after, OR you can use NOAA’s Heat Degree Day (HDD)readings for your area so that you can take into account temperature differences between/among periods. The higher the HDD number, the colder it was.

“I wish I had known about AtticFoil™ a long time ago.”