High $ Quotes Led Us to a DIY Installation & We Saved! 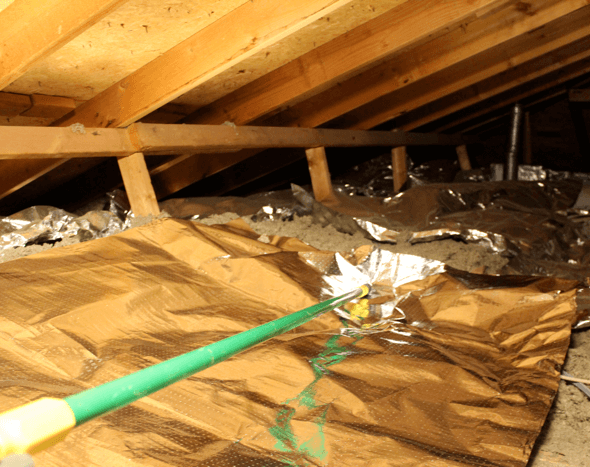 Problem: Home owners had 3 quotes from professional installers to add radiant barrier and weren’t sure what was reasonable pricing.

Solution: The customers did internet research and found that they could install AtticFoil™ Radiant Barrier on their own, get the same quality and save a ton on the installation.

Results/Update: The installation went quickly and the results were immediate. One year later and he is still seeing results each month.

So we saw the foil barriers at a couple of the home shows in our area and signed up for 3 of them to come and give us an estimate. Between the 3 estimates there was a huge variance in price. During this time I started to research the product and found AtticFoil.com on the internet, along with many other sites that talked about it, describing many pros and cons about the different types of product to use. I was very impressed with your sites completeness, covering all aspects of your product and comparing it to other products that were similar.

I sent for a sample and compared it with another from one of the vendors that wanted to install it for us. They were virtually the same (it could have been your product). Seeing how much money we could save by doing it ourselves just about sealed the deal for us. The only problem was, I can’t do it myself, so we checked with my son, and told him if he would install it in our house, we would buy enough for him to do his house and we would help him with that.

“…I was very impressed with [the website’s] completeness, covering all aspects of your product.”

The same day he said OK, I ordered the product. It came within 6 days of ordering (we ordered it late on a Friday). About a week or so later we installed it. That was earlier today (5/3/12). I took numerous pictures and videos of the installation.

To do our attic, which is 1170 sq feet, took just under 2 ½ hours, not counting a small break in the middle. It is now late afternoon and the outside temp shows at 82 degrees, and inside is showing at 74 degrees. Prior to this it would be about 77 degrees inside, so already it’s looking good.

“I sent for a sample & compared it with another…they were virtually the same.”

Update: It’s been almost a year since we installed AtticFoil into our house and we have not changed our thermostat settings during the entire year. It is running the same ‘program’ that been used for about 3 years now. We have seen a savings for every month, except for one, where [family]moved in with us for about 3 weeks, until their new home was ready. During this past year we have also made some small changes to try and conserve energy…I have to attribute the huge savings in KWh used to the AtticFoil™! Based on what our utility company is charging, the AtticFoil™ purchase has paid for itself in less than a year.