DIY install saved over $4,000 and the electric bill dropped the next month! 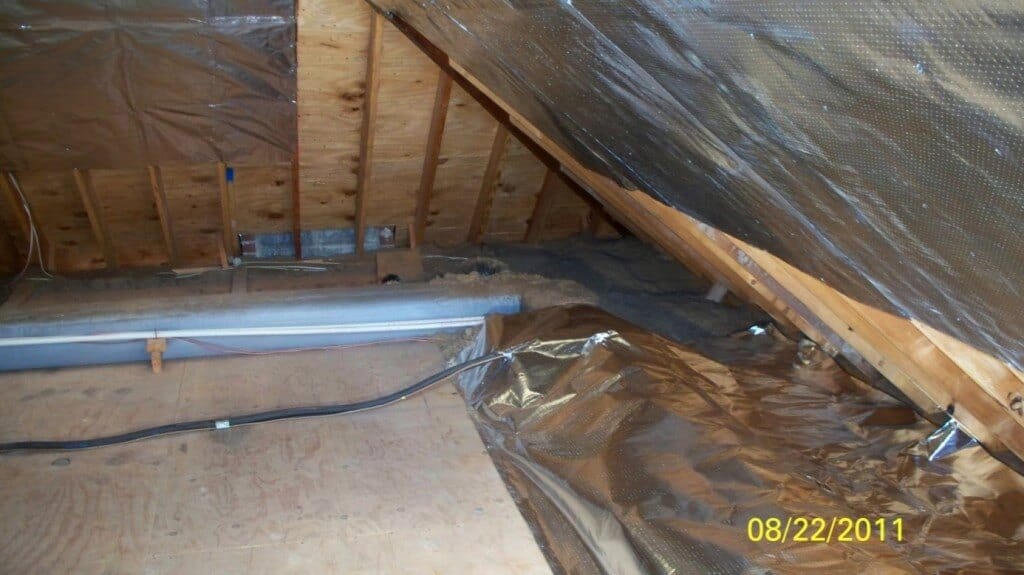 Problem: A complex hip roof that absorbed a lot of radiant heat and overloaded the A/C unit, but the professional install was quoted at over $5,000, after a price drop!

Solution: The customer would DIY for less and use AtticFoil™ Radiant Barrier by installing it via the HYBRID method for year round results and lower cooling costs.

Results/Update: The entire install was done for less than $600 and he began recouping the savings on his next energy bill! One year later and the usage is still saving him on electric costs.

I had heard about the benefits of reducing heat in attics for some time via various media. Last year, “E-shield” came to town with a thunderous ad campaign…and equally thunderous sales people. Their pitch was pretty convincing, but I asked them to leave when presented with the price. They started at $12,500 but with numerous promotions, and my agreeing to be on an advertising post card mailing, the price dropped to $5,500. I showed them the door. I still wanted to do the project so I went on-line and found AtticFoil™ ….YES!

I studied all the tips on the web site… lots of stuff there. The product arrived incredibly fast! I started out at the bottom near the soffit, as instructed, and quickly found that I couldn’t keep a straight line. I ripped out the first run of foil (no damage, as the material is pretty tough) and regrouped to think about this some more.

The challenge was that I have a “hip” roof (to those who don’t know, it’s like a 4-sided-extended pyramid, i.e. two long trapezoids and two triangular areas). I decided to combine several of the suggested installation methods. There is flooring in the central area, surrounded by HVAC duct work that sits on top of exposed floor/ceiling joists with loose insulation.

“I have a hip roof… [so] I decided to combine several of the suggested installation methods.”

I started at the top (where I could manage a straight line) and worked my way down. I had to do it with short pieces (no helper) of about 5 ½ ft long. When I got down to the duct work, I changed to the “cover the floor” method, using my squeegee on a pole to move the foil sheet into position, over and behind the duct to the soffit. Then I sealed out the exposed rafters with another foil sheet between where I left off covering the upper rafter area and the ducts. Finally, I used the existing cross-over braces near the ridge to create a triangular area for heat to collect and be sucked out by the [exhaust] system.

It really brightened up the space with existing lighting, and covering the loose insulation has reduced overall dust in the living spaces as well.

“AtticFoil™ works as advertised, as soon as you start putting it in.”

When comparing to the “E-shield” alternative at about ten times the cost…this is a “no-brainer.” My budget utility bill went from $172 to $143 per month (see photo) during the AtticFoil™ installation. I expect they’ll have to re-calculate this again since I was only about 70% complete when this happened…proving that AtticFoil™ works as advertised, as soon as you start putting it in.

AtticFoil™ has my highest recommendation. Can I buy stock in the company?

** during installation of AtticFoil™ Radiant Barrier