What is the difference between a metalized film radiant barrier and AtticFoil® Radiant Barrier? 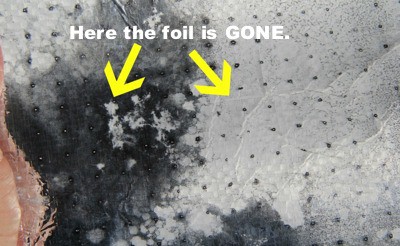 Does AtticFoil® lose reflectivity over time because of oxidation?
The simple answer is no, it does not.

The reason is because AtticFoil® is a pure aluminum product. It’s made from 99.5% pure aluminum and a high quality aluminum is NOT AFFECTED by the natural oxidation process of metal.

When an aluminum surface goes through oxidation, it produces an organic clear coat/layer/skin over the top of itself. That coat will develop to a thickness that prevents the foil from continuing to oxidize so it will not degrade or deteriorate over time. After this process of coating itself, the foil is still pure enough to continue to function as a radiant barrier (either by reflecting heat or blocking heat via emissivity).

“In the case of an aluminum foil, for example, thicknesses for radiant barrier and reflective insulation applications generally range from 6 to 10 microns; even in the most aggressive of environments, heavy oxidation of the foil surface will have little, if any, impact on the emissive and reflective properties of the surface. This is generally due to the fact that the oxide layer will rarely grow to a thickness that either absorbs large amounts of thermal radiation, or consumes the aluminum entirely, resulting in an optically clear 100% aluminum oxide film.”1

Metalized aluminum, however, is made up of a very thin layer of aluminum (approximately 1/200th of the thickness used in AtticFoil® Radiant Barrier) deposited onto a polymer film. These products utilize an artificial coating and claim it protects against oxidation; however, many versions of the mylar foil films have shown problems in stopping oxidation when the coating fails and the foil layer practically disappears from the inner scrim!
*The worst thing you can do to a metalized film product is perforate it! Once you pierce the surface, you allow air/moisture to get in every 1/2 inch of the surface and because moisture can pass between the layers, it can also get in between the clear coating and the scrim and “consume” the super thin layer of aluminum. You can see for yourself; take a piece of metalized film that is perforated, put it in a zip top baggie with a wet paper towel and wait a few weeks to see the effect. Generally, a solid version of metalized film does not have this issue.